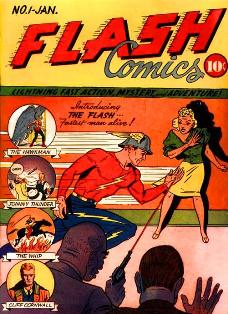 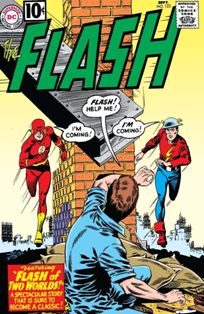 The Flash #123: The first Silver Age appearance of Golden Age Flash and the first mention of an Earth-2 where Golden Age heroes live! Barry Allen appears at the Community Center in Central City to perform for kids, and during one of his amazing tricks is mysteriously transported to Keystone City, a place that he recalls that the original Flash once lived. Prepare for the meeting of the Flash of two worlds!

THE COVER SAID IT ALL: Superman may have been "faster than a speeding bullet," but here was a guy who could actually catch speeding bullets in his hand. This was definitely a hero going places in a hurry.
By 1940, the sales figures showed that superheroes were hot, and DC was eager to repeat its own successes with new characters. It found them within the pages of Flash Comics, which was published by All-American Comics, DC's sister company. (All-American was started up by Jack Liebowitz when his partner, Harry Donenfeld, was hesitant to add more titles to the DC line. Although the companies were separate entities, they promoted each other's titles and shared the same distribution systems. The two companies merged in 1944, when Liebowitz bought out his partner, M.C. Gaines, a fellow who would go on to found EC Comics.)

While Superman could do just about anything and Batman could pull just about any tool from his belt, the Flash had just the one superpower -- but when you're superfast, who needs anything else? In his introductory caption to the first Flash story, editor Gardner Fox called him a "reincarnation of the winged Mercury," which probably explains the winged helmet. His speed wasn't a gift from the gods, though; a laboratory accident gave college student Jay Garrick his speedy powers, although the writers never really explained how inhaling "hard water fumes" could result in superspeed. (Then again, this was the 1940s, and it was a little too early for writers to use that old standby, radiation, as the source of a hero's powers.)

The Flash's early adventures tended to be on the humorous side, while later stories were a little more serious, and Flash Comics raced to the top of the sales charts until the title's cancellation in 1949.

Of course, the Flash wasn't alone in taking it there -- several strips were included in the first issue of Flash Comics, including the almost forgotten "Johnny Thunder," "The Whip" and "Cliff Cornwall." But it was Hawkman who would become almost as big a star as the guy with his name on the front of the book. Back then, Hawkman was the reincarnation of an Egyptian prince and the inventor of an anti-gravity "ninth metal," which allowed a person to fly. He wore wings and a feathered cowl in honor of the Egyptian hawk-god Horus. Together with his wife, Hawkwoman, Hawkman shared the cover with the Flash throughout the run of the series.

Although the names "Flash" and "Hawkman" have been used by different characters since those early days, both continued to fight evil for the rest of the century, and probably will for a long time to come. Both characters have shown that you don't need fifty different powers to make it in this world; sometimes, all it takes is knowing how to do one thing, and how to do it right.

By the end of the century, many of the original DC heroes from the 1940s were still a part of the DC Universe, playing pivotal roles in several series and acting as mentors to the generations of heroes that followed in their footsteps.

It didn't happen quite as fast as the Flash, but there was no denying the excitement that was building. Comicdom's Silver Age had officially begun. 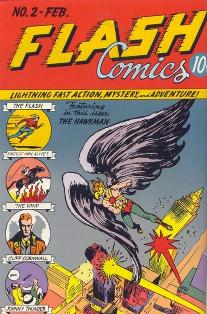 Flash Comics was a title that ran for 104 issues, from January 1940 until February 1949. It primarily starred the Golden Age Flash and Hawkman.

In keeping with the 1940s tradition of assigning comic relief to the superheroes, the Flash hung out with three dimwitted, Three Stooges-like fellows named -- no joke -- Winky, Blinky and Noddy.

The Flash was one of the few Golden Age heroes whose girlfriend was aware of his secret identity, and Hawkman was the first married superhero whose wife fought by his side.

While Hawkman's appearance suggests he was created to cash in on Batman's popularity, writer Gardner Fox claimed he was simply stuck for ideas one day when a bird flew by his window.