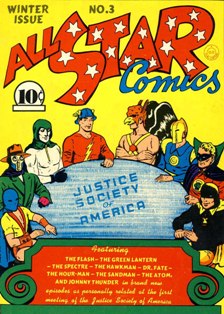 ICE CREAM IS GREAT. Cookie dough is great. Chunks of chocolate fudge are great. But put them all together and mmm-boy... you've just discovered something really great.

Call it the Great Chocolate Chip Cookie Dough Ice Cream Theory of Creativity -- sometimes, the sum of a whole is greater than its parts. It works for desserts, and it works for superhero teams. And in the beginning, there was the Justice Society to put this theory into practice.

By the early 1940s, DC had assembled a large cast of interesting characters, all of whom enjoyed their own successful series. Along with heavyweights Superman and Batman, DC's roster included the Flash, Hawkman, the Spectre, Dr. Fate, the Sandman, Green Lantern and dozens more. Individually, each of them thrilled millions with their heroic exploits, so it didn't take a genius to figure out that a book putting them all on a team would be a guaranteed blockbuster.

During the team's decade-long career, the Justice Society of America was dedicated to fighting spies and saboteurs during the Second World War, and later moved on to such super menaces as the Injustice Gang of the World, which was (logically enough) a team-up of the JSA members' arch-foes. But there were also stories in which writer Gardner Fox (who co-created both Hawkman and the Flash) would also weave social issues such as juvenile delinquency and world peace into the narrative. These heroes can accomplish anything just by working together, the stories seemed to say. So what's stopping mankind from doing the same thing?

Superhero teams usually form when heroes meet a threat that they can't overcome on their own, but that wasn't the case for the JSA. The only thing they attacked when they first came together was a Thanksgiving turkey; they got together over dinner to discuss the troubles that only fellow superheroes could understand. In other words, the very first superhero team came together to provide mutual support, not to kick butt. This emphasis on supporting each other -- and proving the value of working together for a common goal -- has become the blueprint for successful hero teams ever since. 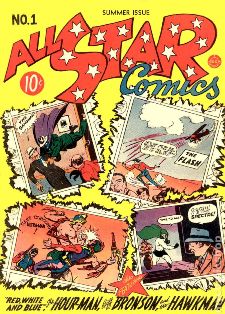 Starting on the left, the heroes pictured in All Star Comics #3 are the Atom, the Sandman, the Spectre, the Flash, Hawkman, Dr. Fate, Green Lantern, and Hourman.

Oddly enough, the adventure that first brought the Justice Society together as a team was never told in the original series

The JSA was so popular that it continued as a strip in All-Star Comics long after its members lost their own books and strips. Its final issue, 1951's All-Star #57, is considered by many fans to be the end of the Golden Age of comics. 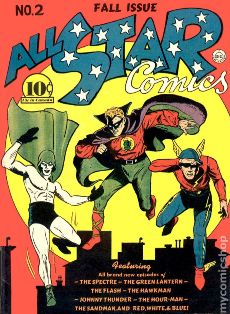